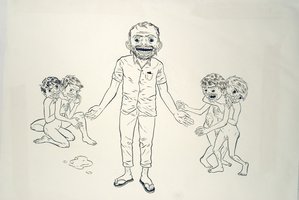 They appear laughing and bickering, en mass. They pull one another’s hair and bite at rocks breaking
their teeth. They are hungry and naked, gendered and yet sexless. They say,”ha-ha!” and “oh no!”

Haha Ohno is a narrative drawing exhibition, the scenes represented there-in serve as a vehicle to
explore basic social dynamics and practices. The characters inhabit a world emptied of living culture but
littered in its detritus. Their attempts to engage with their surroundings result in absurd and grotesque
situations. In some instances the characters are left to decode the meaning of the objects they
encounter, often imbuing the objects with new or alternate purposes. In other instances they intuitively
engage with the space or object on its own terms as if possessed by its history. The characters of
course have no sense of or reverence for history, they cannot conceive of anything but their immediate
experience which they can only qualify with “Ha-ha” or “Oh-no.”